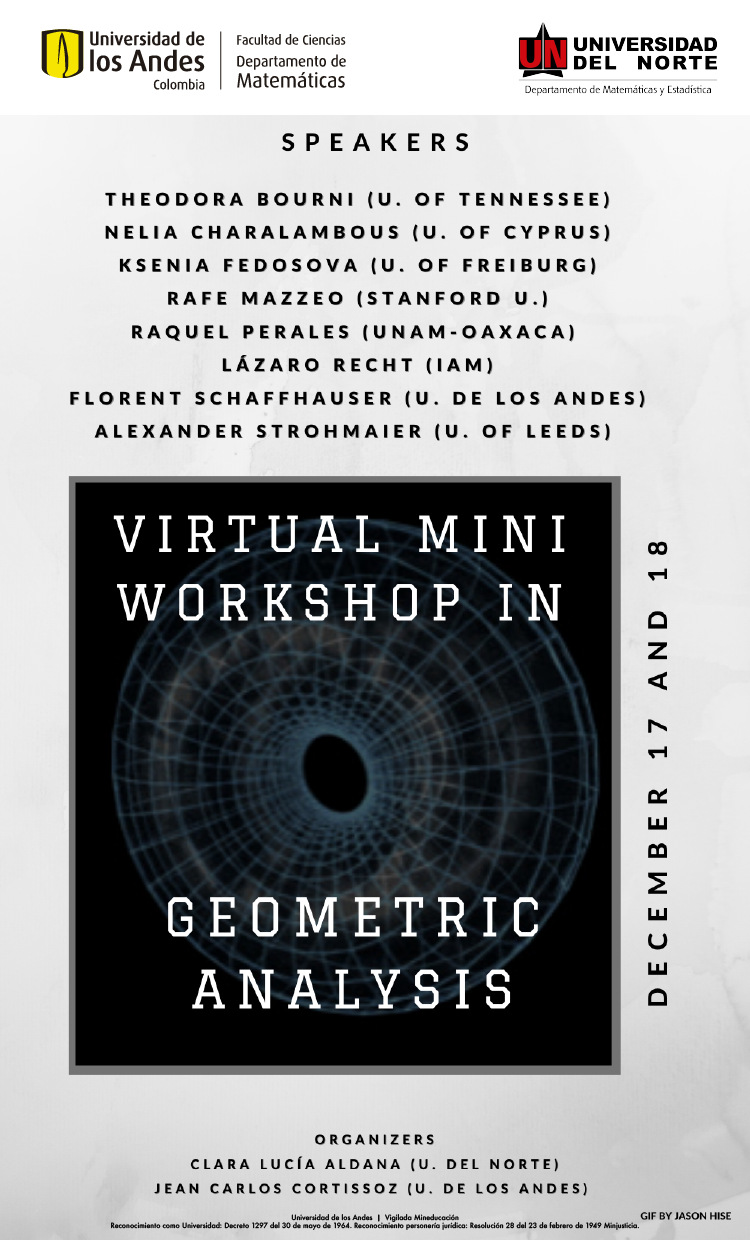 Abstract: The computation of the essential spectrum of the Laplacian requires the construction of a large class of test differential forms. On a general open manifold this is a difficult task, since there exists only a small collection of canonically defined differential forms to work with. In our work with Zhiqin Lu, we compute the essential k-form spectrum over asymptotically flat manifolds by combining two methods: First, we introduce a new version of the generalized Weyl criterion, which greatly reduces the regularity and smoothness of the test differential forms; second, we make use of Cheeger-Fukaya-Gromov theory and Cheeger-Colding theory to obtain a new type of test differential forms at the ends of the manifold. We also use the generalized Weyl criterion to obtain other interesting facts about the k-form essential spectrum over an open manifold.

Abstract: Discrete subgroups of PSL(2;R) can be interpreted geometrically as hyperbolic 2-orbifolds. In the absence of torsion, a finite-dimensional representation of such a group gives a rise to a local system on a surface. To classify the latter up to isomorphism (on a compact surface), it is useful to equip these objects with special Hermitian metrics. Corlette's theory gives a construction of such metrics in terms of equivariant harmonic maps, going from the hyperbolic plane to the symmetric space of a semisimple Lie group. In this talk, we recall the main features of this theory and discuss how to generalize it in order to include discrete subgroups of PSL(2;R) that are no longer torsion-free.

Ksenia Fedosova
Title: On a generalization of transfer operators

Abstract: For hyperbolic manifolds, there exists a straightforward connection between the spectral and the geometric data. More precisely, the lengths of its closed geodesics and the spectrum of its Laplace operator acting are connected by the Selberg trace formula, that can be considered a sibling of the Poisson summation formula. Selberg trace formula provides the information on the eigenvalues of the Laplace operator, however, completely ignoring its eigenfunctions.

In this talk, inspired by Bismut's hypoelliptic Laplacians, we try to construct an analogue of the transfer operator, using the Brownian paths on the manifold instead of the geodesics. We obtain an operator, whose 1-eigenfunctions turn out to be the boundary forms of eigenfunctions of the Laplace operator.

Abstract: An ALG space is a 4-dimensional hyperkaehler manifold with a very special asymptotic structure. I will survey some known results about their geometry and topology and some recent results by others about their moduli. These spaces can also arise as moduli spaces for solutions of the Hitchin equations. The precise correspondence between these two rather different pictures is a special case of Boalch’s `modularity conjecture’. This talk will focus mostly on describing the various ingredients and techniques that go into this, leading to a description of some recent progress obtained in collaboration with Fredrickson, Swoboda and Weiss.

Abstract: Mean curvature flow (MCF) is the gradient flow of the area functional; it moves the surface in the direction of steepest decrease of area.  An important motivation for the study of MCF comes from its potential geometric applications, such as classification theorems and geometric inequalities. MCF develops ``singularities'' (curvature blow-up), which obstruct the flow from existing for all times and therefore understanding these high curvature regions is of great interest.  This is done by studying ancient solutions, solutions that have existed for all times in the past, and which model singularities. In this talk we will discuss their importance and ways of constructing and classifying such solutions. In particular, we will focus on ``collapsed'' solutions and construct, in all dimensions $n\ge 2$, a large family of new examples, including both symmetric and asymmetric examples, as well as many eternal examples that do not evolve by translation. Moreover,  we will show that collapsed solutions decompose ``backwards in time'' into a canonical configuration of Grim hyperplanes which satisfies certain necessary conditions. This is joint work with Mat Langford and Giuseppe Tinaglia.

Abstract: Spectral theory of the Laplace operator on asymptotically Euclidean manifolds is described to a certain extent by stationary scattering theory.
I will define the spectral shift function in this context and review some results for scattering of p-forms and their application.
In the second part of the talk I will specialise to obstacle scattering and explain a new trace formula and its relation to the spectral shift function.
If there is time I will give some applications in physics.

(based on joint work with Y. Fang, F. Hanisch and A. Waters) 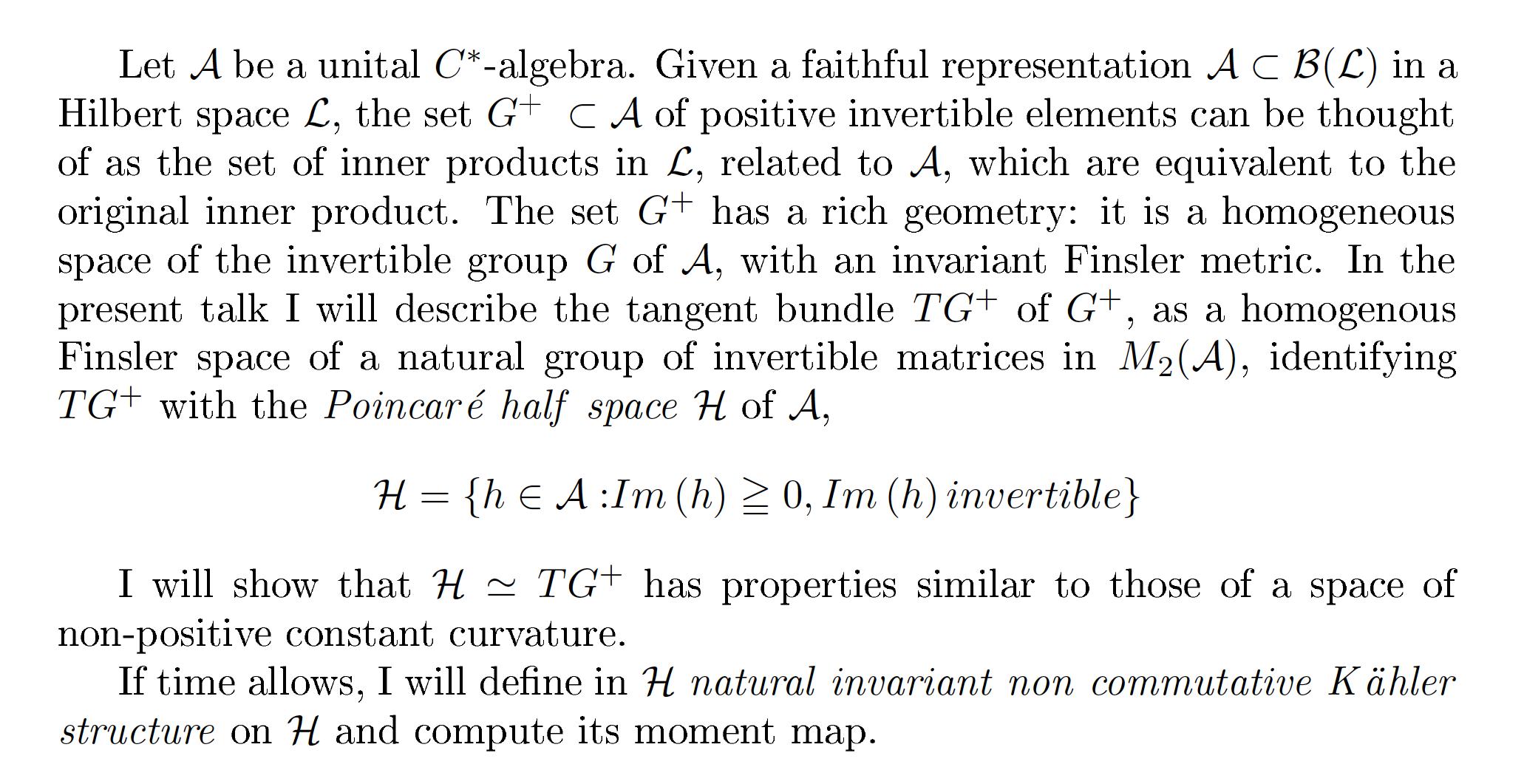